With the continual growth of cities and demand for infrastructure, Elpro Technologies provided a wide-area digital telemetry and

SCADA network for a growing municipality.

With the continual growth of cites and demand for infrastructure increasing from this growth ELPRO Technologies was selected to provide a wide area digital telemetry and SCADA network for a growing municipality in Australia with outlying regional townships.

The Municipality had an existing Analogue Radio Telemetry system in place that was over 20 years old and required an upgrade that allowed for future expansion to the network and to also provide a greater level of security than the previous system.

The new SCADA system was to operate in parallel with the existing older network so as to not impair the day to day operation of the existing system and it was to use ClearSCADA and a Radio Telemetry platform based on cutting edge digital technology.

ELPRO’s migration strategy from the Modbus based SCADA System to the DNP3 I/O Outstation SCADA system was provided as a seamless transition. Cost savings were attained via the use of internal protocol conversion at the outstations that utilised Modbus devices therefore reducing immediate change over of all devices in the network. 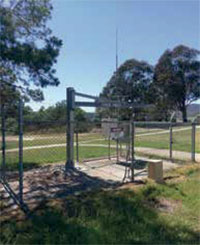 The 415U-2 Digital Radios provide remote diagnostics and connectivity through the radio network to end devices including PLC’s/ RTU’s. This gives engineering and operations the ability to reduce travel time to site for diagnostics and troubleshooting and to also allow for remote access to the network. 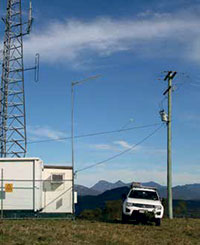 Flexibility in building networks via a common IoT IP platform through such items as LAN, Cellular & Fibre connectivity.

The completion and delivery of the project to the Municipality provided a secure and cost-effective SCADA and Telemetry network which also offered greater visibility of not only its local area but also the remote regional areas allowing Operations and Engineering to have full control of their Water and Waste Water network. 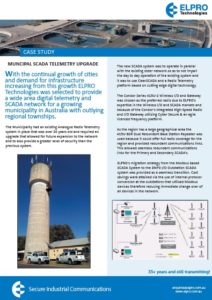